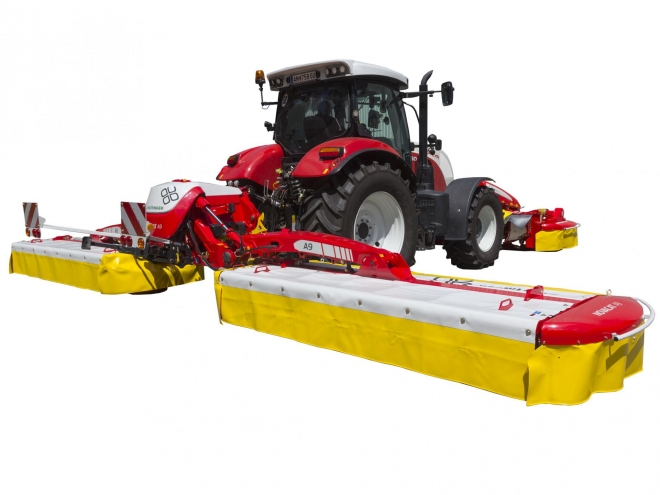 The NOVACAT A10 mower combination from Pöttinger is joined by a younger brother: the NOVACAT A9. Together with a front mower, it covers a working width from 8.92 to 9.18 m and is packed with the same technical highlights.

The powerful centre frame combined with the new Y DRIVE driveline and hydraulic NONSTOP LIFT collision safety device  ensure that the NOVACAT A9 is prepared for the toughest conditions.

The special Y DRIVE input gearbox with bevel cut gears features an output shaft on the opposite side. This means that longer standard PTO shafts can be used with less angle. The backlash-free driveline using standard PTO shafts has been made possible by locating the overload clutches at the gearbox and by optimising the gear ratios. The constant velocity joint in the inside mower drum provides a stress-free link between the angular gearbox and the cutter bar. The result is a smooth running system that offers a higher output, even in tough conditions and in the headland position. This also extends service life significantly.

NONSTOP LIFT is an innovative technology that ideally protects the cutter bar. Fitted to both ends, the collision safety device enables the cutter bar to avoid obstructions efficiently. The special feature is that the boom is mounted on gimbals and is hydraulically preloaded by a triangular arm. The triggering pressure is displayed at the pressure gauge and is easily adjusted. When triggered, the boom folds backwards on the triangular frame and is also raised at the front by the gimbals - a three-dimensional collision safety system. The mower avoids impact with the obstruction so that damage to the cutter bar is prevented at higher driving speeds.

The heart of the mower combination is the NOVACAT cutter bar proven thousands of times in the field with its standard quick-change blade system. Tapered disc surfaces, optimised counter-chop zone and generous overlap of the blade paths ensure perfect crop flow, first-class cutting quality and simultaneous optimum protection of the swath.

Compact during transport, space-saver when parked

For road transport, the mower hydraulically folds upwards and then is locked securely in the transport position. With a transport height of 4.0 m, a transport width of 2.95 and a ground clearance during transport of 31 cm with the narrowest working width and 18 cm with the widest, the NOVACAT A9 is compact during transport. Because the centre frame is at its lowest point in transport position, there is no risk of damage. The mechanical transport interlock is operated hydraulically and is standard on the machine. No lanyard is required. That ensures maximum convenience. Parking stands are provided so that the NOVACAT A9 can be stowed in the raised position to save a great deal of space.

The mower combination is equipped with the SELECT CONTROL terminal as standard (requiring a double-acting remote valve). It allows pre-selection of the mower units, control of the folding side guards, the hydraulic transport interlock as well as setting weight alleviation using shut-off valves. The control terminal also has an integrated maintenance management feature: dependent on the operating time of the mower driveshaft, the control terminal displays which maintenance steps need to be performed on the machine.

First-class cutting quality, reliability, cost effectiveness and extended service life are the trademarks of the NOVACAT A9 mower combination made by Pöttinger, the world's No. 1 for front-mounted disc mowers.