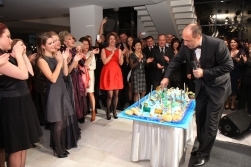 On December 1st the CEO of Bulagro Group Holding Hristofor Bunardzhiev celebrated his 50-th birthday with an exquisite event at the State Opera in Stara Zagora. Among the guests were family members and friends of Mr. Bunardzhiev, clients of Bulagro, as well as representatives of the local business and social community.
The celebration began with a cocktail at which was presented the first solo exhibition of photographs by Mr. Bunardzhiev titled "From the Deep - Part I". It was followed by a magnificent welcome concert by the State Opera, starring famous Bulgarian and foreign artists. Breathtaking fireworks colored the sky over Stara Zagora, and later the legendary Bulgarian singer Vasil Naydenov excited all guests with his timeless hits.
The after party was at the piano bar of Park-Hotel Stara Zagora, where everyone was charmed by the velvet voice of the great jazz singer Vasil Petrov.