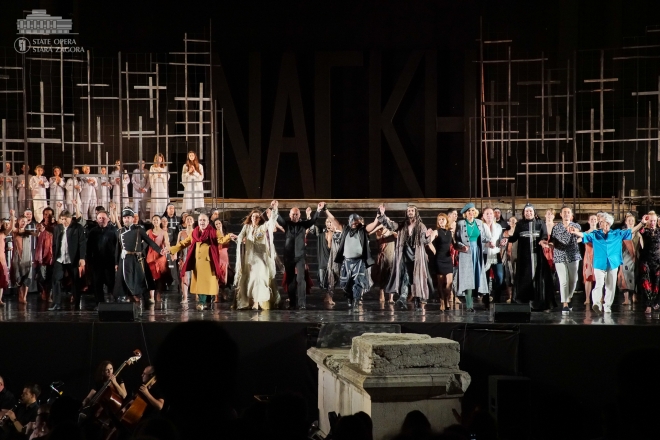 On July 1, 2022, the Stara Zagora Opera with director Ognyan Draganov triumphantly presented its first spectacular production of the musical "Esmeralda - The Hunchback of Notr Dame", based on Victor Hugo's novel. We are delighted to be one of the main sponsors of this magical and unique performance, which was unanimously declared brilliant by audiences and critics alike!

The musical captivated the hearts of all viewers with an exceptional singing selection of beautiful voices and artists - Michaela Fileva, Boris Taskov, Valeri Turmanov, Denis Ivanov, Marin Rusinov and others. The ballet of the Stara Zagora Opera was a real delight for the senses, and the wonderful choir and orchestra, backed by a rock band, added to the magic of the evening.

The musical "Esmeralda" was presented with three premiere performances, tickets for which were sold out very quickly after their release. The stormy unceasing applause that filled the Ancient Forum "Augusta Traiana" in the three evenings were undoubtedly the greatest recognition for all those who shone on the stage and behind it.

Bulagro Group has been a main sponsor of the Stara Zagora State Opera for years and has supported the continuous work of the entire creative team, thanks to which today our city is proud with one of the most modern operas in the entire country.