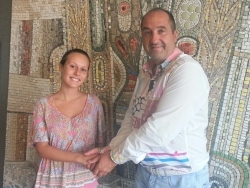 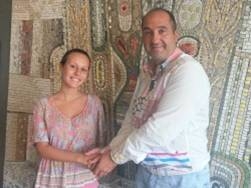 Bulagro Group supported the talented young pianist Sibel Zeynelova by providing financial aid for her participation in a reknown master class in France.

The managing director of Bulagro Group - Hristofor Bunardzhiev, was amazed by the talent of the 16-year-old Sibel Zeynelova and supported her participation in an international master class at the summer music academy in the town of Laroche Diss, Burgundy, France, which took place from July 5th to July 16th, 2012 .

Sibel was born with the gift of music and instinctively chose the piano, without even thinking of another instrument. She started playing at the age of seven and from the beginning it was clear that the child had huge talent. When she was eight, she began participating in various music competitions. Her first major award came a year later, in the prestigious international competition for German and Austrian music in Bourgas, where she was granted a scholarship by the Ministry of Culture.

After that followed successful appearances on several national and international competitions, the latter of which was the prestigious International Piano Competition "Nikolai Rubenstein", held for the 11th time in April, 2012 in Paris. Sibel won the third prize in the extremely strong competition, competing in a group of over 90 participants and presenting five pieces of different genres with total duration of 40 minutes. Support for participation in the competition the pianist received from the Foundation of Dimitar Berbatov.

After her successful performance in Paris, Sibel was invited to join the prestigious master classes, which took place in the French town of Laroche Diss. During the course the talented pianist had the opportunity to take lessons from distinguished professors, and at the grand concert in celebration of the completion of the course, she received the highest recognition and won the heart of the audience.

Sibel has already received invitations to participate in the upcoming international competitions, which will be held in Albena and Sofia, where she will again compete for scholarships.

BULAGRO wishes the talented young pianist a lot of success on her journey onward and upward!